These two are synonymous with Second World War: Vera, a young singer from Britain, singing for the troops, lifting their spirits in the gloomiest days of the war – and Deer Lodge, a hospital for veterans of that same war, healing their broken bodies and souls. They both have reached their 100th birthdays and have celebrated countless achievements along the way.

Dame Vera Lynn is best known for her 1939 recording of the popular song “We’ll Meet Again”. The nostalgic lyrics (“We’ll meet again, don’t know where, don’t know when, but I know we’ll meet again some sunny day”) were very popular during the war and made the song one of its symbolic hits. During the beginning of the war, the Daily Express asked British servicemen to name their favourite musical performers: Vera Lynn came out on top, and as a result became known as “the Forces’ Sweetheart”.

In 1941, during the darkest days of the Second World War, Lynn began her own radio program, Sincerely Yours, sending messages to British troops serving abroad. She and her quartet performed songs re-quested by the soldiers. Lynn also visited hospitals to interview new mothers and send personal messages to their husbands overseas. Her other great wartime hit was “The White Cliffs of Dover”. When Canadian troops joined the fighting she quickly became their favourite as well.

My dad was in the Air Force, stationed in Trenton, Ontario. The plane that was to carry him to the fighting crash-landed. Two weeks later, the train taking him back to that same plane derailed. Both accidents led to Dad’s first visit to Deer Lodge, where he was to recover from a neck fracture. He missed the horrors of the war only to be struck by polio in the ‘50s.

Time marched on, and as post-polio syndrome played havoc with Dad’s body, we saw Deer Lodge again and again in the ‘80’s and ‘90’s. He was always so appreciative that he could convalesce at this centre. He was treated like the gentleman he was, fed well, and cared for. I think my mother was a tad jealous of the nurses in Dad’s life. 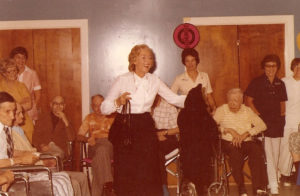 Although Dad didn’t make it to the heavy part of the war, Dame Vera Lynn certainly made it to our gramophone. Her songs always make me think of Dad. I remember chatting with a patient one sunny afternoon while Dad snoozed in his chair. He remembered Vera Lynn and asked if I knew her songs. I did and he told me his story. He was a young Canadian farm boy from the prairies, just barely old enough to enlist. A few months into his stint he was slightly wounded and sent to a VA hospital in England to recover enough to go back fighting. Miss Lynn, as he called her, came to the hospital and sang her famous “We’ll meet again” song, among others. She signed pictures of herself for the boys and wished them safe journeys. Not long after this, the young soldier found himself in a trench, cold, hungry, and scared out of his wits. He had put Miss Lynn’s picture deep into his kit bag so none of the other soldiers would give him a hard time. He said he slipped his hand into his duffel bag and clutched that picture of the pretty British singer long into the night. Somehow it gave him the strength he needed to stay alive.

This is only one of many stories of soldiers, hospitals and pretty singers from this war. I’m forever grateful for Deer Lodge, Vera Lynn, and of course the men and women who made the ultimate sacrifice to keep our country, and many others, free.

And as a member of CJNU Nostalgia Radio Community, I am delighted to continue such a lovely relationship with Deer Lodge and its folks. We look forward to seeing you all in the spring when we broadcast from your main concourse – and yes, we will be playing some Vera Lynn songs.

Helen Harper is a volunteer at CJNU 93.7 Nostalgia Radio.