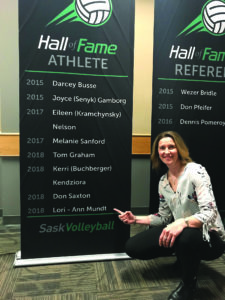 “Being inducted into the (Saskatchewan Volleyball) hall of fame made me realize how amazing my volleyball career was from start to finish,” says Mundt.

Lori-Ann Mundt, Deer Lodge Centre’s support services coordinator, still has vivid memories of the moment that started her down the path to Olympic volleyball glory.

She was nine years old and watching her first Olympic Games on television. “I remember getting chills when Canada was announced and the Canadian athletes entered the stadium in the Opening Ceremonies. When I watched them walk in, an enormous sense of pride rushed over me. I wondered what it would be like to wear a Canadian jersey and represent Canada at an Olympic Games.”

Her induction this April into the Saskatchewan Volleyball Hall of Fame has given her cause to reflect on a career in the sport that saw her win bronze at the 1995 Pan Am Games in Mara del Plata, Argentina, and place tenth at the 1996 Summer Olympics in Atlanta.

“It’s fun to reflect back and look at the big picture and how it all unfolded. Being inducted into the hall of fame made me realize how amazing my volleyball career was from start to finish. All of the hours I spent in the gym, all the volleyballs I set, all the miles I travelled to training camps and competitions, all the stories and memories created with teammates. My mom made me keep a diary when I started playing sports and I’m so glad that she did. It was fun to go through it and relive some of those memories.”

Born in Yorkton, Saskatchewan, Mundt started playing volleyball in Grade 8 at age 14. “I didn’t really know anything about volleyball. All of my friends were trying out for the school team so I thought I would too. My coaches made me a setter and that is the position I played for the majority of my career. When I started playing, I didn’t even know what a setter was—but I was open to trying it. And then I fell in love with the sport.”

One of her fondest memories of playing volleyball in Saskatchewan was being a member of the 1989 Canada Summer Games team.

“We trained together for three years and we were so close, like sisters. The coaches believed in us and we believed in each other so strongly. And to top it all off, our parents even got along. It was so unique and so special. We truly were one big family. It was a unique experience and one that I cherish. We still keep in touch and are planning our 30-year reunion next summer.” 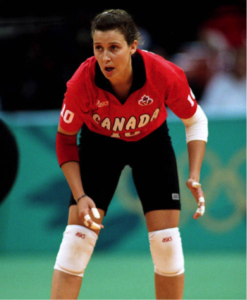 Lori-Ann Mundt at the 1996 Olympic Games, where she played as defensive specialist for the Canadian Women’s volleyball team.

At the 1989 Canada Games in Saskatoon, Saskatchewan, the team captured gold on home court. When the National Team coach presented Mundt and her teammates with their medals, she had no idea she would be playing for him two years later. As she continued to grow as a player, Mundt committed to going as far as she could, but it wasn’t until she made the National Team that she her dream of playing in the Olympics could come true.

“It wasn’t going to be easy, but it was a possibility. We tried to qualify for the Summer Olympics in Barcelona but didn’t make it. The majority of the players retired after that, but I had just started, and wanted to continue to play for Canada.”

In 1992 she moved from Regina, where she’d played on the university team, to Winnipeg. The city had recently won the bid for a training centre that would help her follow her dream.

Looking back, she says she sees how lucky she was to have gone through the volleyball system when she did. International volleyball is highly competitive, and Team Canada has not qualified for the Olympics since her time on the team.

“After getting the email from the Saskatchewan Volleyball Association about being inducted I thought, how was I able to accomplish everything that I did? It took a lot of work and there were a lot of times when I thought about quitting, but I didn’t.”

Mundt says a competitive spirit, a passion for the game, and the tight-knit camaraderie of her teammates fuelled her to persevere when the going got tough. She attributes much of her success to her parents and coaches. “My parents committed a lot of time and energy to helping me reach those opportunities to advance. My coaches pushed me, challenged me and believed in me.”

“Through volleyball, I’ve met so many wonderful people and forged amazing friendships. What an honour it’s been travelling all over the world playing the sport I love. And, of course, wearing that Canadian jersey.”