Hilda Nickel is no quitter.

In the early 1990s, the former nurse and switchboard receptionist began experiencing challenges with daily activities of life. Feeling that her health suddenly wasn’t what it used to be, Hilda underwent numerous tests, after which she was diagnosed with a chronic condition that would change her life forever. She began extensive occupational therapy and physiotherapy to help her deal with the new challenges of daily living – things that once seemed so routine. When it became too difficult for her to walk, Hilda took to a wheelchair and by 1997 she had moved into a nursing home. It was no longer safe for her to be at home alone as she required more and more help. 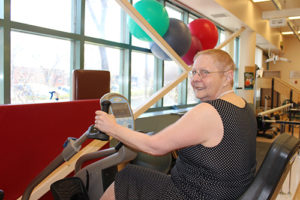 Therapy continued, but most of the time she had to use Handi-Transit to get to and from the hospital for her appointments. She had limited use of her hands and transferring in and out of bed or to the toilet was very difficult due to the terrible pain in her feet. All through this time, her therapists and rehabilitation assistants gave her support and encouraged her, which gave her the confidence to work hard at regaining some of her independence.

In 2000, Hilda moved into Deer Lodge Centre. “After getting a tour of Deer Lodge, I started to see the possibilities of being able to gain the independence that I wanted for transferring in and out of bed and to the bathroom,” she recalled. She was encouraged by the fact that there was a physiotherapy department on site at Deer Lodge.

“I knew that they could teach me the exercises I needed to do to be able to reach my goals,” she said. 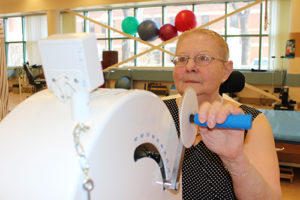 She has worked very hard over the years and if you met her today, you’d be hard pressed to believe that at one time she needed special utensils to eat meals or that she couldn’t hold a tea cup in her hand. For the past five years, Hilda has been playing the organ in Deer Lodge’s chapel for weekly worship services. Before that, she hadn’t played piano in over twenty years, but with therapy and her “never quit” attitude, she re-learned how to play by practicing almost every day and learning new pieces of music.

“Playing the piano and organ is great physical therapy for my hands and also great mental therapy for when I’ve had a stressful day,” she said. “It just gives me such a lift.”

For several years, Hilda has been the chair of the Resident and Family Council at Deer Lodge. The Council meets regularly to discuss issues and advocate for changes related to quality of life for residents.

Hilda credits the interdisciplinary team (IDT) of health care professionals at Deer Lodge for designing a care plan that gave her the opportunity to make use of what the Centre had to offer and to restore to her an excellent quality of life.

“Making Lives Better is the motto here, and the physiotherapists and the rest of the team – that’s what they do!” she said.

“They have given me my life back.”