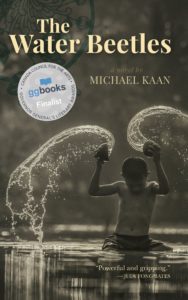 Michael Kaan, manager of the Operational Stress Injuries Clinic at Deer Lodge Centre, continues to garner international critical acclaim for his first novel—including a Governor General’s Award, and now the prestigious Amazon.ca First Novel Award. Michael Ondaatje, W.P. Kinsella, Nino Ricci, and Andre Alexis are among the Canadian literary heavy-weights to previously receive the award, which is worth $40,000.

The Water Beetles (Goose Lane Editions) tells the story of 12-year-old Chung-Man, who lives a life of luxury with his family in Hong Kong until the Japanese invade in 1941. Many of Chung-Man’s experiences are derived from the personal memoirs of Kaan’s father, who passed away in 2006. Like Chung-Man, David Kaan fled with family members to rural China when Japanese forces invaded Hong Kong.

As the manager of the OSI Clinic, which treats military personnel, veterans and their families who are suffering from post-traumatic stress and its effects, Michael Kaan is no stranger to trauma. Nevertheless, he says his day job didn’t inform his writing to any great degree. “This book is about civilians who are victims of war. It’s about what happens in their backyards and their homes, when there’s nowhere else to go.”