Never Too Young to Give 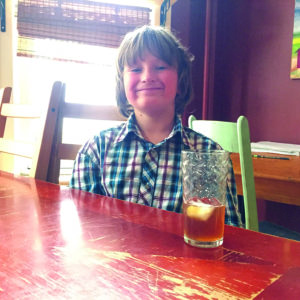 When a customer asked him how he planned to spend the proceeds from a summer yard sale, 8-year-old Zsigunnar Thordarson barely paused before announcing that he would donate the money.

The answer took his mother Daina Leitold by surprise—at first.

“That really came out of nowhere,” she recalls. “His father and I certainly didn’t put the idea in his head. But Zsig does have a lot of empathy for others. He’s always been unusually thoughtful about other people’s feelings. He’s a great example to us.”

Zsig raised additional funds by selling iced tea on the corner of his street. He donated a portion to Deer Lodge Centre Foundation, and another to Snowflake Place for Children and Youth, a Winnipeg advocacy centre focusing on the needs of abused kids.

He chose to support Deer Lodge Centre for a couple reasons. Last year, his 95-year-old grandmother spent more than a month at Deer Lodge recovering from a crushed vertebrae. A military history buff, he saw how Deer Lodge also supports Veterans. His great-grandfather was a Veteran.

Visiting Deer Lodge got him thinking about how technology can help people live healthier lives. But technology costs money to develop and maintain. He realized it was as important for him to support important causes as anyone else. “If I don’t,” he says, “who else will help those who are suffering?”

He admits that neither summer sale was without its challenges. Making change involved doing math (not his favourite subject), and getting the iced tea recipe just right took some trial and error. He foresees a career for himself in law enforcement, or baseball. Wherever his destiny takes him, we know he’ll make a difference for good.

We are currently looking for an Executive Assistant — Admin & Gift Processing. Please see the PDF attachment below for…
Read More
July 19, 2019

Winnipeg, July 19, 2019 – There will be thunder in the streets tomorrow when the Manitoba chapter of the Commandos…
Read More
June 17, 2019