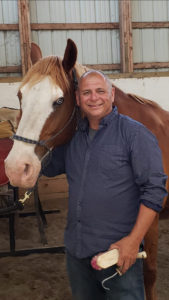 Infantry Corporal Stephane Regis, a client at Deer Lodge Centre’s Operational Stress Injury Clinic, at Can Praxis, a program which uses horses to help military personnel or veterans and their partners recover from trauma.

For soldiers and veterans, bravery is in their very blood. They’re conditioned from basic training onward to charge into places and situations from which an instinct for self-preservation would drive the rest of us away. Like a thousand tiny fractures, the impacts of operational stress can creep into a soldier’s life unnoticed until it’s too late. Sometimes, a soldier discovers that the bravest thing he or she needs to do is the one thing they’re least trained for: asking for help.

I sat down with my good friend, former Infantry Corporal Stephane Regis, to talk about how a bike ride on one of his darkest days put him onto the path of recovery.

He didn’t know it at the time, but in addition to the physical injury that led to his medical release from his position as an Airplane Mechanic for the military here in Winnipeg, he was also struggling with post-traumatic stress disorder (PTSD) and related anxiety, major depressive disorder and ADHD.

Regis had signed up for the Canadian Army Reserve as a young man in 1989, then transferred to Regular Forces out of high school. From there, he was sent for a tour in post-war Bosnia. A series of injuries and traumas then befell him, one after the other. Each seemed manageable as it occurred, but together they compounded their impact to the point of crisis.

Moodiness, anxiety and depression became more frequent—leading to a desperate bike ride that finally brought him to the help he needed.

Without a clear plan or destination in mind, he found himself rolling his bike up to a nearby Veterans Affairs (VA) office, where he asked for help—and got it. Through Veterans Affairs he gained access to a variety of services and supports available to military personnel and Veterans coping with physical or mental health injuries.

“It takes courage to admit that you are a tough soldier and you are scared out of your mind.”

His advice to others facing the same challenges is, Don’t hesitate. Don’t delay.

“Call the VA right away. Tell them you’re having problems, and you just want to see somebody. If there’s an operational stress injury clinic nearby, go there. It’s helped me so much. I talk to friends who are like, ‘Yeah, yeah. Once I get all this paperwork done, and everything’s ready, then I’ll start my treatment.’ Just go! It takes courage to admit that you are a tough soldier and you are scared out of your mind.”

A competitive tough-it-out attitude, a by-product of military culture, is just one of the things that gets in the way of soldiers and veterans seeking treatment. It doesn’t help that stress injuries are invisible trauma, making their severity that much harder to judge without professional help.

“Even though I went overseas, I never went into combat. I thought, because I didn’t have that one big traumatic experience or that time in the Afghanistan war or whatever, there must be nothing serious wrong with me, and I was just gonna have to deal with it myself. I didn’t think that small experiences could add up like tiny cracks until all it took was just one more to smash the whole thing apart.”

When he began receiving treatment, he realized how little his friends and comrades knew about the variety of options. “There’s so much available once you go looking for it.”

Regis accesses services at the OSI Clinic at Deer Lodge Centre. He describes it as a one-stop, full-service shop where he gets the help he needs from people who really understand what he’s going through.

At the OSI Clinic, Regis began courses in cognitive behavioural therapy and dialectical behavioural therapy, as well as mindfulness therapy and rTMS (see page 4). Along the way, he is supported by counselling when he needs it. He’s looking forward to beginning more advanced therapy programs in the coming months.

Another program that has helped Regis is Calgary-based Can Praxis, which uses horses to help military personnel or veterans and their partners recover from trauma and rebuild relationships.

Because horses are so reactive, they give immediate feedback to a person about how their emotional state is impacting others in their lives, Regis explains.

“A horse is a prey animal. When your emotions get excited, the horse senses it, so it’s going to back off. The program’s director says the horse is like the non-injured person in the couple.”

The program teaches couples how to be mindful and manage their emotions with horses, so they can transfer these skills to their interactions with each other. Couples who undertake the program learn to read each other’s emotional signals and body language more effectively. Military personnel and veterans suffering from operational stress injuries learn to tune into their own feelings and reactions.

“You don’t always feel yourself getting tense, right?” says Regis. “You’re just tense. The horse senses that, so he’s going to push away and won’t listen to you. But if you calm yourself down, the horse is more prone to come to you. So you put your head down and breathe. And the horse comes to you, and you reach out and put your hand on the horse and connect. And it’s so good.”

For more information about receiving treatment for operational stress injuries, call Veterans Affairs at 1-866-522-2122 or visit www.veterans.gc.ca to find a location near you.