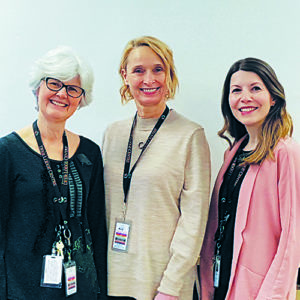 For many transgender people — men and women whose gender identity does not identify with the sex that was assigned at birth — this paradox is a reality they live with every day. Many choose to undertake the process of transitioning into their authentic self, a process that may involve hormone therapies, surgeries, lifestyle changes, and the formidable task of coming out to friends, families and coworkers. Their voice often remains the last bastion between the person they are leaving behind and the person they are becoming.

For Cynthia Fortlage and Cheryl Cooper, two Winnipeg transgender women, a voice training program at Deer Lodge Centre has proven integral to helping them achieve a sense of authenticity and security that has eluded them much of their lives.

Cynthia, a corporate executive in her early 50s, began living as a woman — her authentic self — early in 2016, after living decades as a married man with two children. “It was not a choice to be transgender,” she says; “it’s the lesser of two evils. Coming out was the choice between the impossible and the unbearable.”

She’s already undergone several surgeries and hormone therapy, and will travel to Montreal for gender confirmation surgery in May. Having a female voice is as important to her as having a female body. “I want to walk down the street as a woman and feel safe,” she says. “When my voice fails, it gives me away.”

Cheryl, a health care aide in her mid-50s, grew up in rural Manitoba. She knew she was different from early childhood. “I looked at the men and women around me and I didn’t know which I was supposed to be.” It wasn’t until she gained access to the Internet for the first time that she finally figured out her body was the Cheryl Cooper: “I had an ideal voice I was striving for.”

wrong gender. After suffering years of depression and gender dysphoria, she underwent gender confirmation surgery several years ago. For her, finding her voice gives her control over herself and her identity.

“The voice is something you can change. Having that control over who you are gives you hope, which is something a lot of us have grown up without.”

“We are now the centre for this kind of therapy in Winnipeg,” she states.

Dina Kyriakopoulos, who has been a speech language pathologist at Deer Lodge for five years, says most clients are trans female (born male but identifying as female). This is because trans males usually take hormones that lower their voices naturally. “With our female clients, it takes more work. In rare cases, the larynx can be surgically altered. However, most people have to learn to shape their voice into one that aligns with their identity.”

It’s by no means a matter of simply faking it, she says. It takes commitment and hard work.

“The voice is like a musical instrument. The music it makes depends on how high you place your tongue in your mouth, how you shape your lips, what you do with your larynx. It’s subtle and complex and takes a long time to master.”

Many clients are referred to the Deer Lodge team by a physician or nurse practitioner from Klinic Community Health’s transgender health program, which serves as a conduit between Winnipeg’s trans community and trans-related healthcare resources throughout the city, province, and beyond. Most attend six to 12 one-on-one sessions with Colleen, Dina, or Leslie Sarchuk. Leslie has been a speech language pathologist since 1980. When she retired as director of Health Science Centre Winnipeg’s Audiology and Speech Pathology department several years ago, she was offered her current role at Deer Lodge. “I leapt at the opportunity,” she says. “I really missed clinical work, and I’ve been so happy helping our trans clients find their voices. Deer Lodge is doing something very important for this population, and I’m grateful for that.” 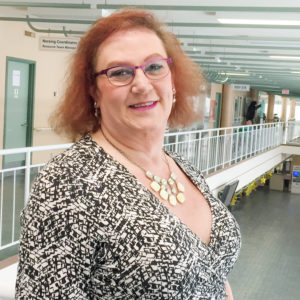 Cynthia Fortlage: “We encourage each other, but we’re also competitive.”

“Really tough in the beginning”

Unlike standard rehabilitative voice therapy, voice therapy for transgender clients involves “creating something new, rather than correcting a problem,” says Dina. “It’s a process of growth and discovery.” She says many of the techniques are similar to those used by professional singers and voice performers, including building new muscle memory and practicing voice drills that raise the pitch, give the resonance a lighter, airier tone, and draw out the intonation. She and her clients can track progress using standard electronic instruments that measure hertz, a unit measurement for pitch. (The voice of a typical adult male falls between 85 to 165 Hz, and that of a typical adult female between 165 to 255 Hz.)

Phone apps are available that can tell clients if they’re holding the right pitch when they practice at home.

Cheryl and Cynthia both participated in voice training last year. Before signing on for therapy, Cheryl had already tried several voice training videos online. “When I came in for our first session, Dina told me most weren’t applicable to what I needed, and which ones to focus on.”

“There was plenty of homework,” Cynthia recalls, laughing. “They could always tell when you didn’t put the time in to exercise your voice.”

Both agree that raising their pitch presented the greatest physical challenges. “You’re stretching your vocal cords. It’s really tough in the beginning,” says Cheryl. Part of the therapist’s job includes helping prevent strain, which can lead to injury.

Ultimately, it can take 12 to 18 months for trans clients to sustain a higher pitch with less effort, says Dina. “Just like learning a new language, you have to really think about what you’re saying at first. You can do well in practice drills, but it takes real effort to reach the point where you can produce a new voice without thinking.”

Cheryl says maintaining her pitch is “pretty much natural now,” but Cynthia admits that, for her, it can still take effort and concentration. “Sometimes you’ll notice I’m not making eye contact when I’m speaking, because I’m thinking about my voice, making sure it sounds the way I want it to, keeping my vowels from dropping.”

“I can tell them how well they’re doing in individual sessions, but what really matters is hearing it from their peers,” says Dina. “It’s a huge risk to put yourself out there in front of other people like that, but they take that risk, and it pays off. They bring their best voices to the group sessions. That’s hugely rewarding for a therapist. And tons of fun.”

“It’s okay for your voice to slip in front of the group,” says Cynthia. “We encourage each other, but we’re also competitive.”

Of course, voice is about much more than pitch. Cheryl and Cynthia have also signed on for advanced sessions that focus on body language, word choice, resonance and sentence flow. “Guys, they’re abrupt,” says Cheryl. “Monotone. They talk in choppy little sentences. But when a woman speaks, the phrases become long and flowing, dancing up and down between vocal registers, almost like music.” 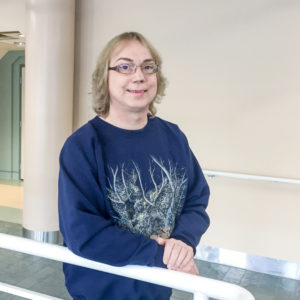 Cheryl Cooper: : “I had an ideal voice I was striving for.”

Unlike many of Deer Lodge’s trans voice clients, Cynthia and Cheryl face the particular challenges of transitioning later in life. When family, friends and coworkers have been used to knowing you one way for decades, their reaction to your new self can be difficult to deal with. These challenges may be less of an issue for the growing number of younger voice clients the SLP team is helping at Deer Lodge. Depending on factors such as culture and family systems, many are growing up with more acceptance and support from friends, family and society.

No matter what their age, for each client, knowing when they’ve achieved their true voice is a intensely personal and challenging process.

For Cynthia, her efforts to achieve the idealized voice of a 13-year-old girl she knew in school ended up in compromise. “I couldn’t get there. Decades of testosterone and time had done their work on my vocal cords.” Nevertheless, the voice she managed to create helped her accept herself, and even gain a greater degree of acceptance from friends and family who weren’t initially comfortable with her transition. “Before my mom passed away last year, she introduced me to a friend as Cynthia,” she says. “I can’t tell you what that meant to me.”

For Cheryl, the search for an authentic voice, like an authentic self, can be a tricky thing. “Half of it is fantasy. I had an ideal voice I was striving for, but you never get there. At some point you have to deal with the fact that you’re never gonna be Julie Andrews.”

Cheryl knew she’d finally found her voice when she left a message on her mother’s answering machine. “She had to replay it several times before she knew it was me. Every day, every time you’re accepted, every time someone on the phone says ‘Yes ma’am’ instead of ‘Yes sir’, you feel like you’re more in sync with the world. Or the world is maybe more in sync with you.”

Leslie says that when it comes to serving this community, good counselling skills are vital. “Voice is connected to how we feel. You really have to be okay with listening, supporting, not just walking someone through exercises and drills.”

Colleen, Dina and Leslie all agree that helping transgender clients gain confidence in who they are continues to be one of the most rewarding aspects of their job. “In other areas of speech language pathology, you don’t see the changes so measurably,” says Leslie. “Here, you’re watching people blossom, right before your eyes.”

Rhea Mossman Sims has been a nurse practitioner for the Transgender Health Clinic, a part of Winnipeg’s Klinic Community Health agency, since 2014. Like Deer Lodge Centre’s speech language pathology team, she’s seen a sharp rise in the number of transgender people seeking the clinic’s services since she began working there—a rise she attributes to greater awareness and social acceptance.

But not everyone knows how to refer to someone who is transgender. Things can get confusing, for instance, when the gender of the person you’re speaking to doesn’t appear to match the gender on his or her ID.

Rhea’s advice is simple: “When in doubt, simply ask. Ask which pronoun they prefer, which name they prefer to go by.”