Each year since 1921, 13 million poppies bloom on the jackets, hats and lapels of Canadians in remembrance of our country’s war dead. More than a symbol of remembrance, poppies also honour our veterans — including those currently serving, ex-personnel, and their families — through funds raised by the Royal Canadian Legion’s annual poppy campaigns.

“Remembrance is the cornerstone of the Royal Canadian Legion’s work in Canada,” says Ronn Anderson, chairperson of the St James Legion No. 4’s poppy campaign. “The poppy campaign looks back in remembrance and forward to the needs of our veterans today and tomorrow.” The campaign does this by supporting grants for food, clothing, medication, medical appliances and equipment, emergency shelter, housing, medical training and research. Some of the funds also support educational bursaries for descendants of veterans and remembrance activities that ensure Canadians never forget the sacrifices made by veterans.

Dominion Command provides the supplies — including the poppies. The campaigns themselves are conducted by volunteers, which keeps expenses extremely low. “That means when we spend the money, we spend it on our veterans.” Anderson, who has chaired the St James Legion campaign since 2000, says each Legion branch manages its own campaign, but all proceeds go into the Royal Canadian Legion’s Poppy Trust Fund. From there, funds are dispersed according to strict guidelines. Branches can request some of the money to go towards programs or services that help veterans in their local community.

Deer Lodge Centre, for example, is one of several charities that benefit from the St. James Branch campaign. Poppy funds directed to Deer Lodge support medical equipment that enhances the care veterans receive at the centre. Over the past 17 years, the campaign has raised between $5,000 and $10,000 per year for Deer Lodge Centre.

A retired veteran of the Royal Canadian Air Force, Anderson also represents the Royal Canadian Legion on the Deer Lodge Centre Foundation’s board of directors. He says that in his experience, the number of people contributing to the fund has continued to grow — which is important because the needs of veterans have not diminished over the decades.

“Deer Lodge has always provided great support to our veterans — not just those of past conflicts like the Second World War and Korean War, but also to younger veterans serving in more recent operations.”

“In the First World War we called it shell shock. We didn’t know much about it then,” says Anderson. “Thanks to places like the OSI Clinic, we know much more about it today, and we see the incredible value of supporting PTSD treatment and research.”

The OSI Clinic treated more than 450 people last year. Those are 450 more reasons, says Anderson, to wear your poppy with pride.

You can support the Royal Canadian Legion Poppy Campaign in the weeks leading up to Remembrance Day by donating to poppy boxes at businesses and retail outlets, restaurants, grocery stores, gas stations, and more.

You can also donate to your local Legion Branch, or directly to the National Poppy Trust Fund at www. legion.ca.

History of the poppy

Why was the poppy chosen as the symbol of remembrance for Canada’s war dead?

A writer first made the connection between the poppy and battlefield deaths during the Napoleonic wars of the early 19th century, remarking that fields that were barren before battle exploded with the blood-red flowers after the fighting ended.

Prior to the First World War few poppies grew in Flanders. During the tremendous bombardments of that war the chalk soils became rich in lime from rubble, allowing ‘popaver rhoeas’ to thrive. When the war ended the lime was quickly absorbed, and the poppy began to disappear again.

Lieut-Col. John McCrae, the Canadian doctor who wrote the poem In Flanders Fields, made the same connection 100 years later, during the First World War, and the scarlet poppy quickly became the symbol for soldiers who died in battle.

Three years later an American, Moina Michael, was working in a New York City YMCA canteen when she started wearing a poppy in memory of the millions who died on the battlefield. During a 1920 visit to the United States a French woman, Madame Guerin, learned of the custom. On her return to France she decided to use handmade poppies to raise money for the destitute children in war-torn areas of the country. In November 1921, the first poppies were distributed in Canada.

Thanks to the millions of Canadians who wear flowers each November, the little red plant has never died. And neither have Canadian’s memories for 116,031 of their countrymen who died in battle. 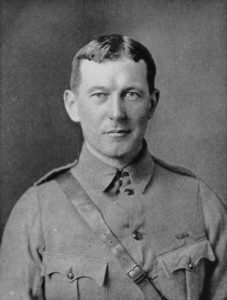 The person most responsible for the adoption of the poppy in Canada was Lieutenant-Colonel John McCrae, author of the poem In Flanders Fields.

An artillery veteran of the Boer War in South Africa, McCrae has been described as a person with the eye of a gunner, the hand of a surgeon, and the soul of a poet.

He was a tall, boyish 43-year-old member of the Canadian Medical Corps when he went into the line at Ypres on April 22, 1915. This day marked the first time the enemy attempted to use poison gas. For the next 17 days and nights, as the Allies repulsed wave after wave of the attacking enemy, he worked on the bank of the Yser Canal, dressing hundreds of wounded soldiers. He never changed his clothes for the entire 17 days. At times the dead and wounded actually rolled down the bank from above his dugout. At other times, while awaiting the arrival of batches of wounded, he would watch the men at work in the burial plots which were quickly filling up. 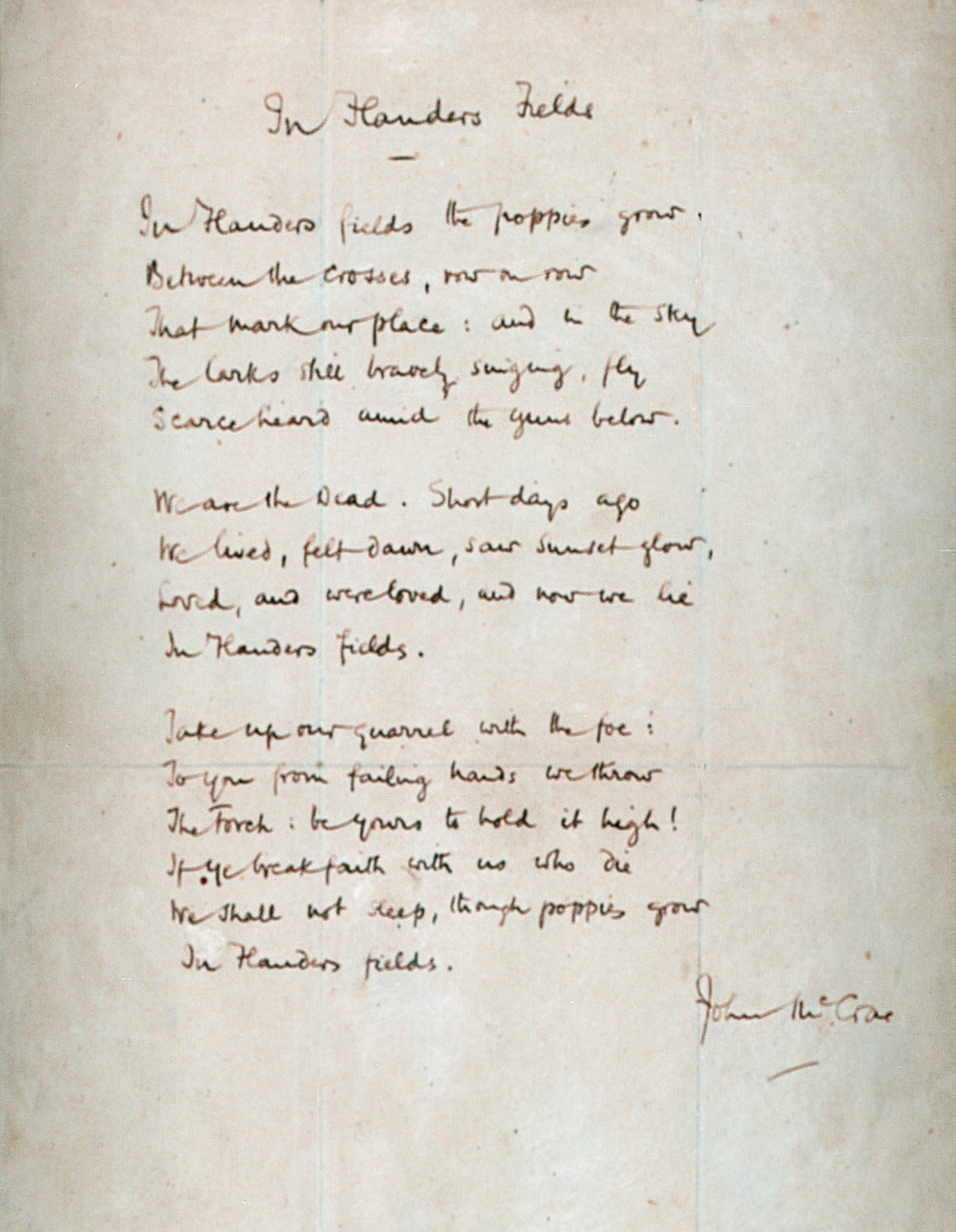