“What could I do but dance with him?”

His wife Betty still lives independently and comes to visit him three times a week. When she can no longer look after herself, she’ll join Ian in the centre. 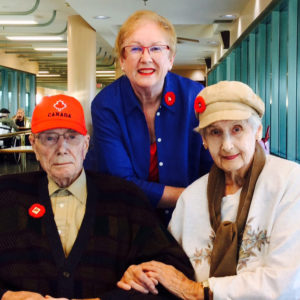 Both in their nineties, Ian and Betty have shared an incredible life together that began 70 years ago, at the height of the war. Ian, a Virden farm boy, served in the RCAF’s No. 411 Spitfire Squadron. Betty was a private in the RAF. They met at a dance at RAF Redhill, south of London, where Ian’s squadron was briefly stationed. Betty still remembers a stranger tapping her on the shoulder, and turning, and looking up into Ian’s big blue eyes for the first time. “What could I do but dance with him?” she says.

They danced all night long.

At the end of the war they married. Later, Betty joined Ian in Canada. Today, Ian and Betty are among a diminishing number of surviving couples who served in the Second World War and are still together.

In 2015 their grandson did some sleuthing and discovered that Ian and Betty were not only eligible but overdue for some very special military honours. Col. Andy Cook, Wing Commander of 17 Wing/CFB Winnipeg, presented them with Certificates of Recognition, signed by the Prime Minister in honour of their service to our country. He also presented Betty with Her Majesty’s Armed Forces Veterans Badge and the War Medal 1939-1945. Later, Ian received the Legion of Honour, awarded by the Government of France to all surviving Canadian Forces members who served in France from D-Day until the declaration of the Liberation of France.