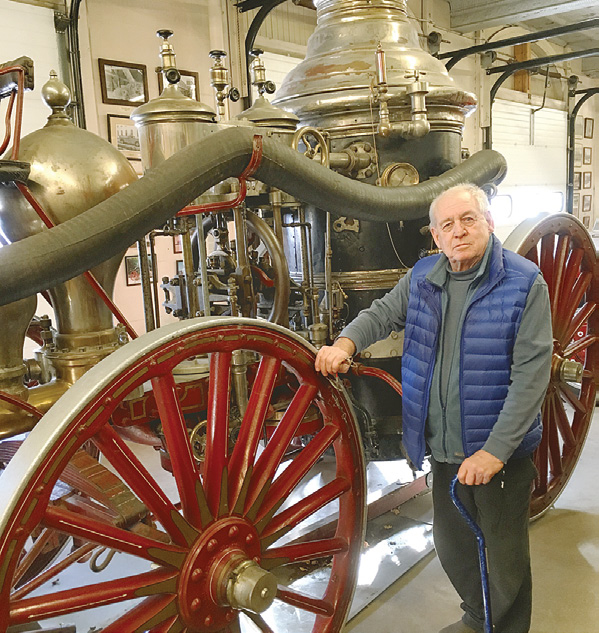 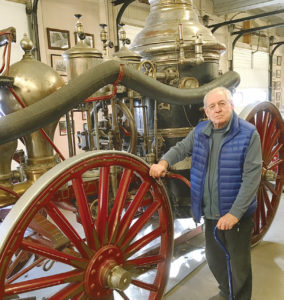 There’s a hidden two-and-a-half story brick building located in downtown Winnipeg which has played a big part in both the history of the city, and the history of Deer Lodge Centre.

The Winnipeg Firefighters Museum at 56 Maple Street, was built in 1904 and was an active fire hall until 1990. Designed by Alexander and William Melville, it was one of five fire halls built in 1904. The design was so well received that eventually their plan and design was used for 14 of Winnipeg’s fire stations.

Inside the brick walls of the firehouse-turned-museum, stories can be heard a couple times a week by a group of volunteers, many of whom battled some of the most historic blazes in Winnipeg’s history.

Capt. George Treddenick (Ret.) is one of those volunteers. He spent 37 years as a Winnipeg firefighter and worked nine of those out of 56 Maple Street before retiring as captain in the late 1990s. Throughout his almost four decades as a firefighter, Treddenick worked alongside many different people and noticed that many firefighters in the city, especially early on, had come from a military background.

“I think it was an ideal fit for people in the military because they already had many of the skills that were needed for the job,” says Treddenick. “They were disciplined, trained, and a lot of them had special skills such as trained paramedics who had developed their skills in the trenches and battlefields of Europe, the construction field, and electrical knowledge which is really important to know and understand when you get to a fire.” 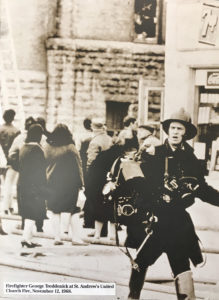 The returning veterans had the skills, but with limited job opportunities, the people who were lucky enough to become a firefighter were expected to work long hours. Treddenick says this led to some of the firefighters going on strike.

“After WWI, the veterans came back and wanted jobs and there weren’t a lot available because the people who didn’t have to go to war had most of the other jobs,” Treddenick says. “So they became firefighters, but working 24-hours-a-day, seven days a week led to many firefighters to support the strike, and later to join the already striking workers in the now famous 1919 strike.”

The Winnipeg General Strike began May 15, 1919, and within hours between 30,000, to 35,000 workers left their jobs. The almost unanimous response by working men and women closed the city’s factories, shutting down Winnipeg’s retail trade and stopping trains. Public-sector employees, including postal workers, telephone operators, policemen and firefighters, joined the workers of private industry in a display of solidarity. Treddenick adds that the strike, which ended June 25, 1919, proved to be a success as it created more jobs for veterans.

“After the strike, the hours went down to 12 hours a day, six days a week. That opened up a lot more job opportunities and many of the veterans were able to find employment as firefighters.”

Because of the physical, emotional, and psychological demands of careers in the military and firefighting, Deer Lodge Centre has played a big role in their history in Winnipeg. Deer Lodge, which began as a military hospital in 1916 for returning WWI soldiers, has treated many veterans and firefighters throughout the years. 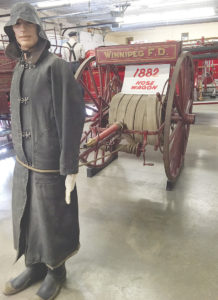 1882 Hose Wagon on display at the Winnipeg Firefighters Museum.

“Due to the type of work we do, many firefighters ended up at Deer Lodge after they retired due to health issues, and just like the veterans who were returning from war, our firefighters have continued to be treated at Deer Lodge over the years,” Treddenick says. “They have played a big part in the history of firefighters in our city.”

Much of this information can be found at the Winnipeg Firefighters Museum. The Firefighters Historical Society was formed in 1982 by a group of firefighters with an interest in collecting and preserving material related to the fire service. Treddenick is a founding director of the museum, which houses a 2,000 book library, and over 10,000 catalogued photos and slides of fire scenes, including apparatus and personnel, from Winnipeg’s firefighting history dating back to 1882.

Also on display are some of the earliest “firetrucks” ever used in Winnipeg, including an 1882 Ronald Steamer, 1928 LaFrance, 1930 LaFrance, 1937 Diamond T-hose wagon, 1958 Mack, and a 1966 Mack. Both LaFrance vehicles are a Canadian built “Foamite-LaFrance”, and all were expressly built for the City of Winnipeg.