The Canadian Longitudinal Study on Aging (CLSA) is the largest and most comprehensive study of aging ever undertaken in Canada, and Deer Lodge Centre is playing a pivotal role. The study will provide a unique opportunity to examine the aging process and the factors that shape healthy aging. The goal of the study is to provide a better understanding of the complex interplay among the many of determinants of health, including gene-gene and gene-environment interactions.

One of the most pressing policy implications of an aging population is health and social care affordability. Population forecasts suggest that the proportion of seniors in Canada will reach an unprecedented level in the years to come. By 2026, one in five Canadians will be age 65 or older. In certain provinces, the number of seniors is expected to double. With the baby boomers now entering their retirement years, there is a strong need for high-quality evidence to inform clinical, public health and social policy decision-making that is directed towards improving the health and wellbeing of Canada’s seniors.

Dr. Verena Menec, professor in the Department of Community Health Sciences, Faculty of Health Sciences, and College of Medicine at the University of Manitoba, is the lead site investigator for the study. Menec says the results of the study are important to the advancement of aging research in Canada.

“The study will enable researchers to move beyond providing a snapshot of the adult Canadian population toward observing and understanding the evolution of diseases, psychological attributes, function, disabilities and psychosocial processes that frequently accompany aging,” Menec adds.

“By collecting information on the changing biological, medical, psychological, social, lifestyle and economic aspects of people’s lives as they age, the CLSA will contribute to the identification of modifiable factors that can be used to develop interventions to improve the health of Canadians.”

The CLSA consists of a national, stratified, random sample of about 50,000 women and men aged 45 to 85 years at the time of recruitment. Participants undergo repeated waves of data collection at three-year intervals and will be followed for 20 years. The inclusion of study participants as young as 45 years of age enables researchers to view midlife experiences prospectively, since important changes known to influence outcomes later in life occur during this period. The lower age limit also permits inclusion of a sample from the baby boom cohort (i.e., those born between 1946 and 1964). The upper limit includes individuals entering their senior years who are making the transition into retirement, those who are already retired, and those who have already reached old age. One of the interests in studying the oldest age group prospectively is to examine transitions into the final years of life.

The CLSA has two components. One group of participants, the Tracking Cohort, is interviewed via telephone interviews only (about 21,000 Canadians). The second group, the Comprehensive Cohort, has an in-home interview and comes to a data collection site (DCS) for in-depth clinical, physical and cognitive assessments (about 30,000 Canadians). 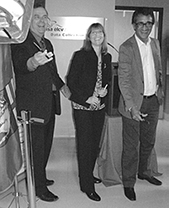 Each of the data collection sites has about 3,000 participants. Menec says the Deer Lodge Centre plays a very important role in the study.

“In Winnipeg, there are 3,100 participants who have had a baseline assessment at Deer Lodge with about 2,000 of them having already come for a first follow-up assessment,” says Dr. Menec.

“The second assessment of our Winnipeg participants is expected to be completed by April 2018, at which point the second follow-up will begin. Since it takes about 3 years to collect data on 3,000 people (about 1,000 per year; about 5 per day), a new follow-up starts every 3 years. In other words, data collection does not ever stop – as one follow-up gets completed, the first group of people is ready for the next follow-up – with data collection expected to continue on an ongoing basis for about 20 years.”

This study didn’t just happen overnight. In November 2001, the Institute of Aging of the Canadian Institutes of Health Research (CIHR) issued a Request for Applications (RFA) for the development of a protocol for a new initiative, the Canadian Longitudinal Study on Aging. A research team headed by three principal investigators – Dr. Susan Kirkland, Dalhousie University, Dr. Parminder Raina, McMaster University, and Dr. Christina Wolfson, McGill University – submitted a joint application, and were awarded CIHR funding to undertake the development of the proposal for this initiative over an 18-month period, beginning in October 2002.

“It took a lot of work to get the study off the ground,” says Menec. “In Winnipeg, CLSA got off the ground because of Real Cloutier agreeing to have a DCS at Deer Lodge Centre. It meant renovating space on the 8th floor of the Tower Building that had previously been used as a staff room. Our first CLSA participant came through the door in the fall of 2012.”

As part of the study, CLSA interviewers visit Deer Lodge Centre participants in their homes to conduct face-to-face interviews, and schedule their visit to a DCS. At the DCS, participants are asked to undergo a series of additional tests and interviews. additional interviews, cognitive assessments, vision tests, a hearing test and electrocardiography (ECG). Other measurements, such as blood pressure, lung function, carotid artery wall thickness, strength and physical performance, and bone density scans are also taken. Blood and urine samples are also collected (with participant consent) at the DCS.

Dr. Menec says working with Deer Lodge Centre has been a great experience.

“Deer Lodge has been extremely helpful throughout – first of all, of course, in agreeing to host CLSA, then during renovations and, since we’ve been up and running, in continuing to have us stay at Deer Lodge,” Menec adds. “We really can’t say enough great things.”

The first follow-up of CLSA participants will be completed by spring 2018. Use of the data is expected to increase substantially once longitudinal data are available.