Spring is around the corner – just behind the daffodils 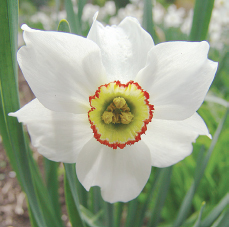 Along with the longer days comes our longing for flowers and sunlight and nothing imitates sunlight better than the lovely daffodil, officially known as Narcissus. Its cheerful yellow, white, orange and sometimes pink hues are a harbinger of brighter days ahead for winter weary eyes.

I don’t know why we don’t see more daffodils planted in Winnipeg and throughout Manitoba. Many varieties are hardy here and they have an advantage over tulips in our climate in that they are long livers and will gradually increase, needing division and transplanting only every five to seven years or so. I plant ‘King Alfred’, introduced to Europe in 1899 and as hardy as they come. A big, robust daff, it never fails to gladden my heart when the snow is gone.

But long before that happens, daffodils begin appearing in flower stores. They are inexpensive – usually a batch of five will cost under $6 here – and they have a good shelf life in a vase if you care for them properly. Cut fresh daffodils underwater on an angle about one-half inch up the stem. Use cold, clean water (you can add a drop of bleach or a penny to the vase to keep the bacteria at bay). Change the water daily. You can give them a bit more life if you cover loosely with Saran wrap and overnight them in the fridge or a cool space. Don’t set them in sunshine. They offer enough of that on their own. Also, don’t mix daffodils with other flowers. They have a toxic sap that will put a quick end to the other blooms.

All except one of the thousands of types of daffodils are fall planted bulbs that need a cold period before being able to bloom. The exception is Narcissus tazetta, otherwise known as paperwhites, the variety that is often forced in water. If you bought daffodil bulbs last fall thinking you would put them in this spring, and if they haven’t turned to mush so far, try putting them in the crisper drawer in your refrigerator and hope for the best this spring – get them into the ground as soon as it can be worked.

Next year, pop your daffs into a hole that will give you at least three to four inches of soil cover over the top of the bulb. Sprinkle some bone meal on the bottom and dig the hole a foot in diameter so that you have room for about five bulbs. Daffodils look best when planted in a clump. They don’t mind being planted under trees because they will probably bloom before the leaves are out. There are some late-flowering species. Check the package label. Buy some early, mid- and late- bloomers to keep the colour coming for weeks. In a cool spring, blossoms can last up to 20 days. In a hot spring, that can be reduced to five.

By the way, there are five species that bloom in fall. Their leaves appear after the flower. And there is one green variety that is more interesting – it blooms at night and has scrawny green flowers – than beautiful.

On the other hand, the old fashioned Narcissus poeticus is white with a red rimmed corona. The B.C. grown N. jonquilla can be bright yellow or white. There are literally thousands of varieties. The smallest is N. asturiensis at five to eight cm. The tallest is a variety of N. tazetta at 90 cm.

Daffodils are not that fussy about soil, but they don’t like soggy ground. Be sure they get enough drainage. And you may not want to plant them next to your favourite rose as the bulbs, stems and leaves have some toxicity that can declare war on such neighbours. Not that this is totally a bad thing. It also deters rabbits and deer that love your tulips. Daffodils produce an interesting toxin, Galantame, that is used in the treatment of Alzheimer’s. They have long been a staple in the traditional pharmacopeia to treat everything from cancer to muscular diseases (it has been used to treat muscular dystrophy). They are grown commercially for their Galantame in Wales. The volatile oil from narcissus is used in dozens of perfumes. Arabs used the oil to treat baldness; East Indians to smooth over the body, along with rose and jasmine, before prayer.

As the years go by, daffodil bulbs will bury themselves deeper into the earth. They have contractile roots (like dandelions) that have the ability to pull the bulb deeper. The leaves die back after flowering and storing enough energy to produce new flowers in the springtime. By freeze-up, the leaves and flowers for next year are already formed within the bulb.

Daffodils are one of the most important bulb crops produced all over the world. They are the official plant of Wales and are a symbol of the fight against cancer (they have cancer fighting potentials). From the Iberian Peninsula, they have gained fans globally. Hundreds of millions are sold every year. Get some for yourself and you will fall in love.